Our cosy holiday home The Big Moose is located in the countryside about 10 km from the town of Strängnäs. In the vicinity are quaint villages with harbours, lakes, castles, cathedral, steam train, steamboat and also the ancient Vikings capital on the island of Birka, a Viking Festival and Knight Games. Close by one can canoe, cycle, mountain bike, hike, swim and golf. In the woods around the house you can pick berries and mushrooms or have an encounter with a fox, moose, elk or deer. 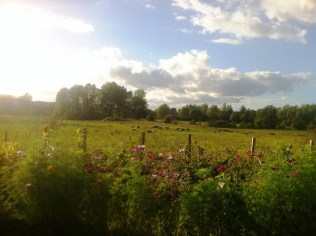 Within the hour you are already in the beautiful capital Stockholm (the Venice of the North) with many fine museums, culture and commerce; enough to wander around for several days. The location of our house very well soothed to make trips to the city of Stockholm and its unique archipelago (skärgård) around Stockholm with thousands of islands on the Baltic Sea.

The house was built in 1904 as an agricultural workers dwelling for the personnel of the landowner. As early as the 17th century farm workers lived on our plot. The house was completely renovated in 2006 and equipped with the comforts of today with the preservation of the original details.

The house has a large garden with a beautiful view where one can enjoy the clean air and the Swedish silence. It is surrounded by vast forests dotted with a lake and small streams with beavers. You can borrow detailed maps from us, but one can still get lost in the woods and wonder about all the blueberries, mushrooms and lichens.

Foxes, badgers, roes, cranes and hares we see regularly wander past. The forest is also home to wild boar, wolverines, lynx and perhaps even a stray wolf; but all those animals unfortunately are seldom seen, but you can hear them at night sometimes. We have called the house The Big Moose as these big boys also wander in the woods around our house and since our property is called Lilla Åstorp (Little House on the elevation); big versus small.

Swedish summers can be very hot and the nights long and light. In autumn and spring the sunsets show fabulous colours and one can see countless stars. In the winter you can skate on all the lakes in the area and start cross country skiing directly from the house.

If you want to go sightseeing or do something active, there are many options nearby: an extensive list of options is to be found on the Surroundings page. The table shown on page Availability explains all special Swedish public holidays; such as Santa Lucia, Fettisdagen, Valborgsmässoafton and Midsommarafton. Dance around with the Valborg fire or around the tree with Midsummer.

It is especially interesting for German guest to know that the Inga Lindström television series were filmed in our town and county Södermanland. Furthermore the famous German writer Tucholsky lived in our town from 1925 till 1930 and wrote the book “Schloss Gripsholm” here and has been buried here too.

We immigrated to beautiful Sweden with our family in 2005 and we speak English, Dutch, Swedish and German.

Welcome! or as they say in Swedish: Välkommen!